Hi! We are here to help you.

Type your question here, or browse topics below to view answers or reach a support agent.

What is an "unidentified caller"?

Anyone who dials in to the audio conference using a telephone but doesn't enter an Audio PIN is known as an "unidentified caller". This means that GoToMeeting cannot identify them by name, so it views them as a separate participant. Organizers will see those individuals appear in the Attendee list as "Caller [X]".

Note: Unidentified callers are available for the desktop app, Web App and Android app only. 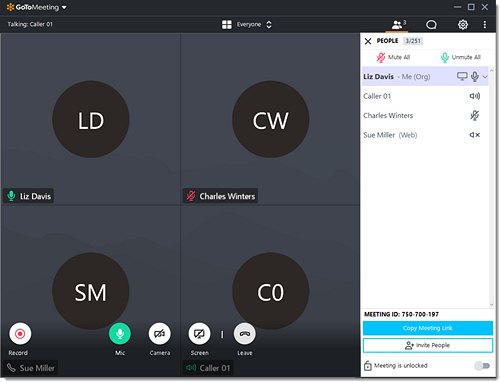 When an attendee connects to audio via Computer audio (mic and speakers), GoTo Meeting automatically detects their identity. But if an attendee uses Phone audio (i.e., dials in with telephone) to connect to session audio, then GoTo Meeting needs some way of identifying who the phone call is coming from and detecting that they are the same participant who joined the session from their computer or mobile device.

In order to do this, GoTo Meeting provides a unique Audio PIN to each attendee who selects Phone audio. Once they enter it, GoTo Meeting knows who they are. However, if the attendee dials in but does not enter their Audio PIN, then GoTo Meeting has no way of recognizing them. Therefore they are seen as "unidentified" and listed as a separate participant.

If the caller later enters their Audio PIN, then GoTo Meeting will recognize them as an existing attendee and "merge" them with their existing entry in the Attendee list.

Note: Unidentified callers are not counted as part of your attendee limit.

Unidentified callers is a feature that must be enabled by an account admin. Once it has been enabled for an account, all organizers will automatically have it used in their meetings.

What is the Audio PIN?

Connect to Audio using your Telephone