Organizers may have multiple versions of GoToMeeting installed on their computer, but the active version is set by the LogMeIn server and may vary by account. To run sessions using the version installed by the MSI, organizers' accounts must have the same version set on the server. If you're on a Mac, you can learn how to install via DMG.
Note: Installing via MSI is an advanced feature that requires administrator-level permissions on the target computer(s). Once GoToMeeting has been installed for all users on the machine, by default the automatic upgrades feature will be used to get updated versions as they are released and remove older ones (i.e., it is not necessary to install subsequent version updates via MSI). To control automatic upgrades on a computer level, a GPO policy controlling the automatic upgrades can be applied. Using SCCM or another tool to install the MSI on the SYSTEM Level does not allow for the setting flags to be modified.

Downloading the desktop app is available on paid plans only. Learn more. 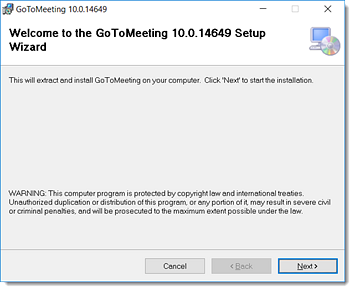 See MSI Installation Guide for detailed steps.
Note:  If you do not have sufficient permissions to install software onto your computer and instead need the assistance of an IT Administrator to do so, then your IT Admin should ensure that you are also running the latest version of the GoTo Opener. See to learn more.

If you frequently join sessions that are run using a build other than the one that you use, you may want to pre-install a few different versions of the desktop app to make sure you are able to join sessions quickly and don't experience a delay while the new build is installed.
Note:  Approximately 90% of sessions are run with the most current build, so most attendees won't need to use the older builds at all (and therefore do not need to install the multi-build MSI file.
Click here to install the GoToMeeting multi-build MSI, which includes the following builds:

You can use the Install Manager & Client Setup Wizards to install GoToMeeting on a XenApp. Detailed instructions will be included in the installation package. Note that the standard IT MSI can be used for XenDesktop.
Note: Audio and recording features are supported with GoToMeeting installed in XenDesktop environments, but they are not supported in XenApp environments.

Do I need the MSI to install GoToMeeting?

No – in most cases, it is not at all necessary for you to install via MSI. The GoToMeeting desktop app does not require administrative rights in order to be installed, so you should be able to easily download and install it on your own computer.

We simply provide the MSI file as a convenient way for IT Admins to distribute GoToMeeting to the computers in a network domain. In addition, organizers who experience difficulties installing via the regular EXE file may have better success using the MSI.

Do I need the MSI to update my software?

No – it takes care of itself! Once you install the GoToMeeting desktop app on a computer, it will automatically update itself (without needing to re-install with MSI). By default, the desktop app is set to perform silent updates while the user is not in a session.

If you do not want proactive updates to be used or older versions to be removed, you can disable automatic updates. See Use Automatic Updates to learn more!