User Sync rules allow you to select an Active Directory group and add a rule about the products for which the users in this group will receive entitlements for, and what administrative privileges they will have.

You may have multiple rules for a given directory group (also known as organization group), and a user may belong to more than one group in the Active Directory. If you have multiple rules, you can manage the priority of the rules, and if desired, map custom attributes. Once you enable and run User Sync, you can always modify or delete an existing rule. If you run into any issues, you can troubleshoot.

Create Your First Rule or Add a New Rule

Create User Sync rules to tell the system how to provision the users sent from the Active Directory Connector to the classic GoTo Admin Center (e.g., assigning products, roles, etc.).

Results: You have created and configured your User Sync rules. 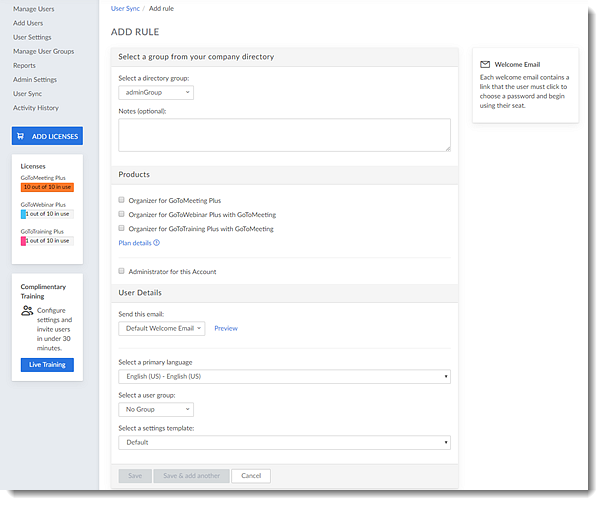 Manage the order of priority for your User Sync rules.

If you have multiple rules, you can select and drag on each rule in the "Re-order" column to adjust the prioritization of the order in which the rules apply. The rule with the highest ranking (i.e., lowest priority rule number) takes precedence over subsequent rules, meaning Rule #1 takes priority over Rule #2.

Once you have configured user attributes on the ADC v2 (and if desired, created your own custom fields), you can map your attributes in User Sync.

Once you have set up your rules and their prioritization, then you are ready to run User Sync.

Results: Congratulations! You have completed all of the steps for setting up the Active Directory Connector v2. You can also learn more about updating the ADC v2 to the latest version when new versions become available.

Users within directory groups are never deleted. If all applicable rules for a user are deleted, the user becomes in a state of "suspended" which retains their account and product-related data (e.g., upcoming meetings, stored recordings, etc.). Only the settings within the rule are removed from use while the users will continue remain on your account.